Travel over the excelent Bairrada wine area, that together with its roasted suckling pig and Tentugal pastries are the main gastronomic specialities that finishes both at Coimbra, head of the oldest Portuguese University, rich on knowledge and history, with its amazing Joanine’s Library XVIII century, the iconic Machado de Castro museum, the Santa Cruz Church where we have the two tumbs of the two first Kings of Portugal, the old Cathedral, and the Almedina’s Gate that survived from the Arabe ruling times, or even discover the origins or the Roman Empire in the Iberian Peninsula by visiting the Coninbriga ruins! 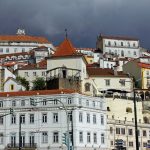 See other tours too